A sound reproducing device with a mechanically damped diaphragm, characterised in that between the diaphragm and rigid abutments located at a distance of a fraction of a centimetre from it, fine, resilient structures of hard, highly resilient material used in a thickness of dog stems of millimetres are applied in a few, narrowly defined zones.

This was a patent by Dr. Emil Podszus from 1931. It was the fourth in a series of patent applications relating to loudspeakers. He initially tried to compensate for the disadvantages of existing concepts. At the same time, he worked on completely new inventions. As early as 1931, for example, he developed an electrodynamic loudspeaker with several coaxially arranged cone diaphragms of different sizes - still available on the market today as buzzing cones. 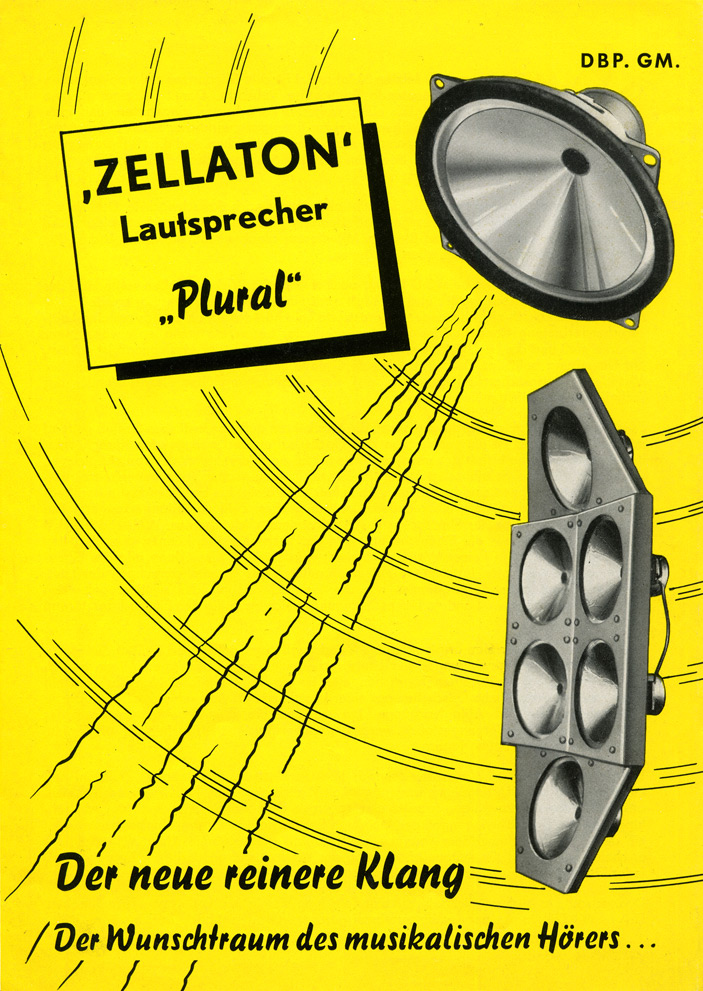 One year later, he devoted himself to improving the sound of telephones with loudspeaker systems.

However, the most important concern remained the improvement of the membrane. He used hardened fabrics impregnated with varnish and resin, later different fibers and fillers bound into the varnish and experimented with different membrane thicknesses, until he finally found the solution: a foam solidified on a carrier with bubbles of different sizes - enclosed by walls a few hundredths millimeters thick. By varying the films on the front and back as well as the quantity and type of fillers he was able to further optimize the sound conduction and damping as well as the hardness and rigidity of the membrane. The next step in the right direction was the use of plastic foils for the bead and the centering, the design of which enabled him to significantly improve the impulse behavior.

A further milestone was his “Plurale”: several geometrically correctly arranged loudspeakers of different sizes per stereo channel. As a result, he was able to significantly reduce the stroke of the single chassis and thus the distortion.

The icing on the cake was the newly developed tweeter which had a transmission range of up to 16000 Hz - a true sensation.

From the beginning it was his goal to build a loudspeaker for everyone to enjoy high-quality music reproduction. Nevertheless, he and his son Kurt inspired many private and also industrial customers with these exceptional sound converters which were far ahead of their time – such as for example the studio supplier Klein + Hummel. Thus, the era of high-fidelity loudspeakers was initiated - by Zellaton - handmade by Dr. Emil Podszus and son. Manuel Podszus, the grandson, now continues the family tradition – committed to build loudspeakers that are truly ahead of their time. 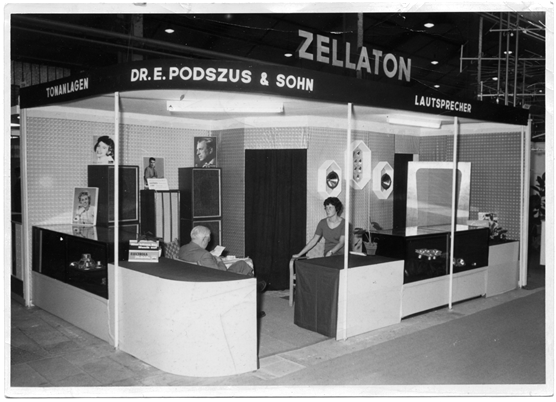 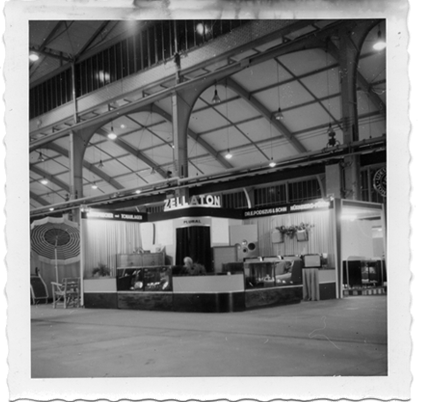 Born on January 21, 1881, Dr. Emil Podszus passed his state exam (among Nobel Prize laureates) at the Max Planck Institute and received his doctorate from Nernst. He worked as an inventor in numerous fields very early on. Highlights of his activity include the development of the ball mill, which was instrumental in inventing bronze colors, followed by the large-scale whirl mill. Industries in these fields continue to make use of his methods to this very day.Concurrently, he invested heavily over several decades in thousands of tests to invent the “foam diaphragm”, dubbed “Zellaton”. 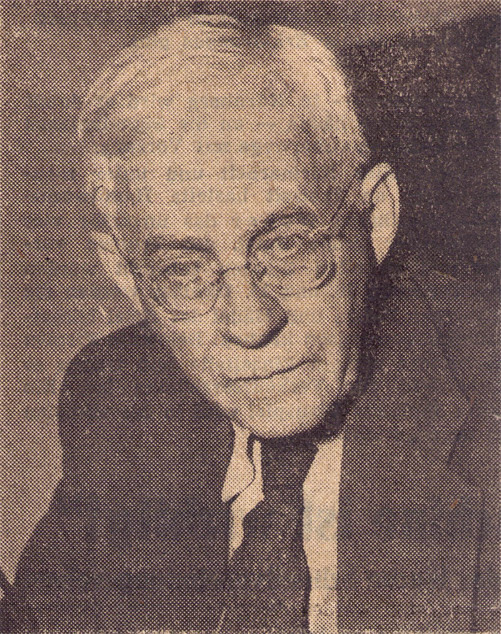 How did that happen?

What sparked the idea was his wife baking foam made of egg whites. As he watched her, he immediately thought to himself: “I’ve got to apply foam to a substrate!” He discovered a suitable material that could be foamed and was exceptionally stable as well as resistant to both humidity and heat. Following extensive tests, he found a propellant that caused paint - applied initially to cardboard and then to silver foil - to swell until it formed miniscule bubbles. That was around 1950, with testing beginning about 20 years earlier.

How to bake now?

A converted garbage can served as an oven in the beginning. That's how "production" began!
His Podszus-Zellaton loudspeakers attracted so much attention that the directors of the Siemens company visited his production site. They were stunned when they saw this "oven" in the cellar. They wanted to equip a series with 10,000 devices. That would not have been technically possible in East Germany to completely dispense with material procurement. On the advice of a secret police officer that he would be arrested, he fled to the West and had to start anew. He now took a "normal stove" for baking. His son and an assistant, Mr. Görlich, stood by his side. The distribution went very well. The press and many critics spoke of an unprecedented purity of sound. The distorting natural oscillations of the usual diaphragms were missing.

Podszus received the first large, golden Inventor Medal from the City of Nuremberg. The award ceremony involved the Bavarian Symphonic Orchestra playing before an illustrious audience. Podszus hosted a Beethoven concert played through two of his Zellaton acoustic baffles. The performance was applauded by the audience with standing ovations - an absolute first. No one had ever experienced anything coming close to that quality and purity of sound. His speakers accompanied him to the end of his life. And to this day, this unique technology inspires many people. 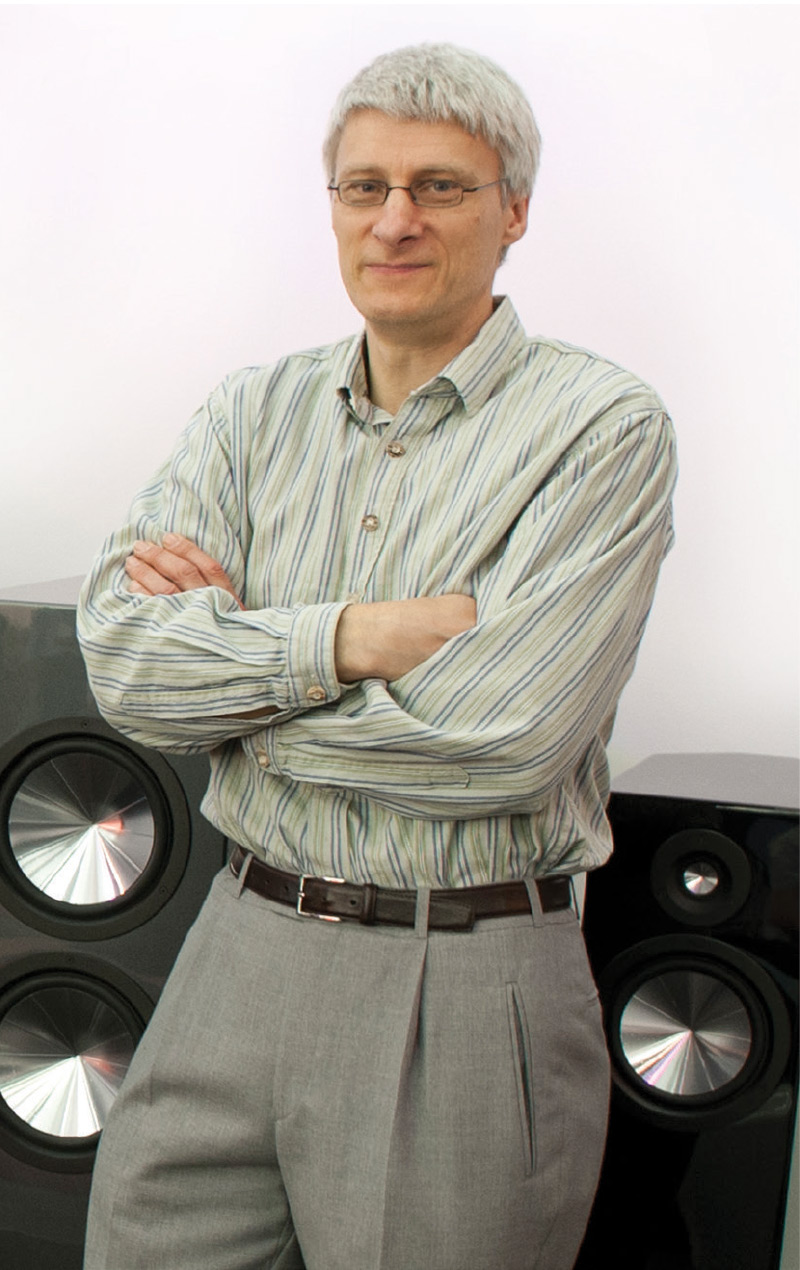 After a short period as an employee in a factory for hobbing machines he started his own business. He worked for renowned companies such as Bosch - today Bosch Rexroth AG - and Faulhaber Motoren supplying industry customers worldwide. Always technically up to date, he used the first 2D and 3D systems for his sophisticated problem solutions. For Daimler AG, for example, he designed a fixture for 3D measurement of car doors where extremely low tolerances are required. A further area of responsibility included the design of room-filling transfer systems and the redesign of components in various development departments - some of which are now patent pending in parts of the world. In recent years, he has worked in micro-robot technology, where his designs generally fulfilled the desired tasks right from the start. Today, a number of devices serve as showpieces because they perform highly complex functions in the smallest space, for which even specialized manufacturers require considerably larger installation spaces. His extraordinary creativity and rapid recording of complicated processes as well as his unconventional approaches to solutions are always very well received by development managers. Finding the perfect solution has always been his driving force. This is, of course, reflected in his passion: to build loudspeakers that - like the original - touch the listener in their innermost being and inspire with the greatest possible perfection.

Manuel Podszus' passion for music reproduction true to the original runs in his blood - early on he developed loudspeakers with the well-known hard foam membrane "Podszus-Zellaton" by Görlich. Since no suitable tweeter was available, he began to experiment with the technology of his grandfather Dr. Emil Podszus and to bake diaphragms. However, developing a tweeter with hard foam technology proved to be more challenging than expected. Decades would pass before all technical problems were solved. The membrane had to weigh significantly less than 0.2 grams, still work without partial vibration and of course be stable enough. Only pure iron was considered as the magnetic material in order to achieve a field strength of approx. 20,000 Gauss. Countless materials, shapes, geometries, sizes and coatings were tested and continuously optimized for centering and beading. At the same time the further development of the other sizes up to the 300 bass began; those also had to work as perfectly as possible down to the last detail. By varying the magnetic field strength, the spring stiffness of the centerings, the wire strength of the voice coils, the adhesives used, the bubble size in the diaphragms, etc., including some well-kept company secrets, we were able to achieve this and achieved numerous improvements. Several containers filled with disassembled loudspeakers testify to the unbelievable effort that has been made to this day. But in the end, it was all worth it – enjoy pure music with Zellaton.